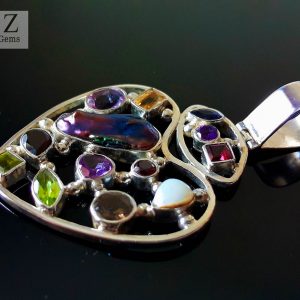 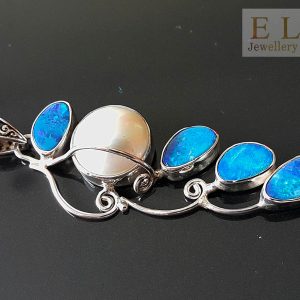 Beautiful unique 925 Sterling Silver Cross Pendant with natural mystic topaz stones. The item weighs 20 grams. The length of the charming pendant is 67 MM and the width is 40 MM.
Mystic Topaz is quite a new gem type, first seen around 1998. It is natural colorless (white) topaz that has been coated, giving it a unique rainbow color effect. It is not a gem type on its own, but rather considered an enhanced or treated colorless topaz. The coating technology, known as thin film deposition, was pioneered by a company called Azotic Coating Inc. Mystic topaz may be so-called because its attractive changing colors appear deep, mysterious and unusual. Mystic topaz usually appears to display rainbow colors, with greens, blues and purples being quite prominent. Since the treatment is a coating, it is not a permanent enhancement, but its remarkable appearance makes it an interesting gem in its own right. Please, check our other items for combined shipping and/or matching sets.