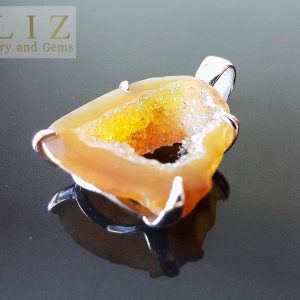 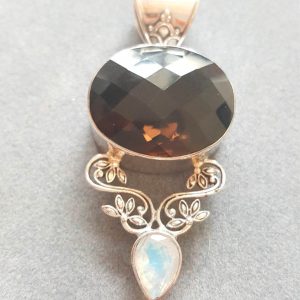 Please allow 2-3 weeks shipping as we are in Bangkok Thailand at this time. Beautiful Sterling Silver Leaf Pendant with Natural Earth Minded Untreated Sapphire. The pendant weighs 5,7 grams. The total WEIGHT of Sapphire is 9,8 carats. The length of the pendant is 40 mm. The width is 19 mm.

The Sterling Silver Pendant is Rhodium plated which prevent silver from oxidation and keeps it always shinny. Rhodium belongs to the Platinum group of metals. Rhodium plated silver is the best type of silver to buy on the market cause it will never tarnish, looks better than real white gold.

The sapphire has, for centuries, been seen as a symbol of the heavens, a guardian of innocence, a bestower of truth, a promoter of good health, and a preserver of chastity. It is believed to brings gifts of fulfillment, joy, prosperity, inner peace and beauty. Some wore it to ward off illness or as protection while traveling.