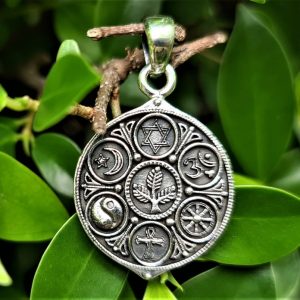 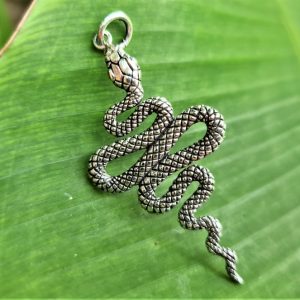 The weight of the Pendant is 5.1 Grams

Ouroboros, emblematic serpent of ancient Egypt and Greece represented with its tail in its mouth, continually devouring itself and being reborn from itself. Ouroboros is a gnostic and alchemical symbol that expresses the unity of all things, material and spiritual, which never disappear but perpetually change form in an eternal cycle of destruction and re-creation. The Ouroboros serpent is meant to be a positive symbol that represents unity and the natural eternal cycle of destruction and re-creation.

The Pentagram has a long and complex history as a religious symbol. Found scrawled in caves of ancient Babylonia, the five pointed star was copied from the star shaped pattern formed by the travels of the planet Venus in the sky. In Wiccan/Pagan lore, the pentagram symbolizes the five elements- earth, air, water, fire, and spirit. The Wiccan emblematic pentagram faces point upward to symbolize the triumph of spirit over matter; the modern Satanic pentagram is transposed, point downwards, to symbolize earthly gratification, or the triumph of the individual over dissolution. Some Wiccan initiatory grades also utilize a reversed pentacle, although for different purposes.

In later times, it was used by medieval Christians to symbolize the five wounds of Christ, and figured in the heavily symbolic Arthurian romances. In medieval times, the pentagram represented the proportions of the human body.

Through the Middle Ages and Renaissance, the pentagram was commonly used as a charm against witches and demons. (like other protective knots, it was considered effective only if drawn perfectly).

It was not until the twentieth century that the pentagram became associated with Satanism, probably due to misinterpretation of symbols used by ceremonial magicians.

In alchemical texts, the four elements (in Latin)- flatus, ignus, aqua, terra, superseded by light, or divine energy- illustrated the process of creation, and the biblical motto Fiat Lux, or, “let there be light.”